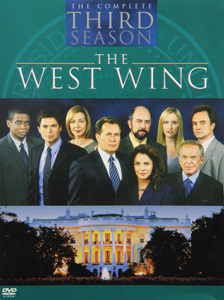 CJ's Secret service agent is buying a candy bar and flowers for CJ. He arrests someone who is robbing the store.
"This is Donovan, I need NYPD at a Korean grocery at 98th and Broadway"

He is shot and killed by a second criminal.

After the gunshots and you hear an actor speaking in the play.

"In the future, in case you are wondering, 'Crime, boy I don't know' is when I decided to kick your butt" - Bartlet
At this point, the scene switches back to the play and a child singing...while parts of this last scene is OK, it moves suddenly to the assassination, so it is best to just skip the entire scene...it is accomplished and Bartlet looks regretful...whether you want to listen to the song is a matter of taste, and it brings us to the end of the show.

Shareef is assassinated in a covert operation.