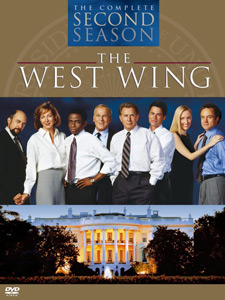 Previously on The West Wing...

"What was the assignment with the pilot?" - Stanley

Silence then a phone ringing ...."when did you find out?" - Josh

Josh and Stanley are talking.
"I put a glass down" - Josh
"Yeah, I don't think you did" - Stanley

"You missed the coaster with quite a bit a force". - Stanley

"Josh, I diagnosed you in five minutes". - Stanley

"Josh! Josh! How did you cut your hand?" - Stanley

Josh getting shot up close also putting his hand through a window.

Yo Yo Ma stops playing and applause is heard. "OK then" - Stanley