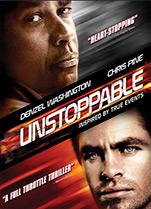 At first glance, you would think there was no way this movie was skip-able, but it turns out to be relatively mild for violence, but extremely exciting. There are a lot of exciting scenes with no violence.

One of the main characters does have a little blood on him for some of the movie, so if you don't like that, you might want to skip it.

The 2nd and 3rd scenes are not that bad, but lengthy, just hang in there if you are skipping them (or have someone just scan past them).

Officers are patrolling a crossing and there is a car accident.
"Ma'am, for your safety, please get back in the van." -Police officer

Two horses and a man narrowly avoid getting hit by the train, but are fine. In the same scene there is a car crash, but no one is hurt at all.

An attempt to board the train fails, resulting in someone being somewhat injured, we don't see the injury at all, but we do see him crashing into the train and then into a glass window, but the violence is not too graphic. Then, a train car with a man in it blows up. The explosion is shown fairly closeup, but the actual death is not graphic or shown up close. Then, we see news footage of the wreck. This is a long scene. It is revealed later that the man being lowered recovers completely.

Will is calling out distances...then tries to set a pin
"Try and get down there and see what you can do....Be careful, be careful."....
"Will can you read me?" - Denzel

We assume that Wills foot is crushed. we see some machinery move, and he says "ah!" We see blood on his boot afterward, and then he wraps the outside of his boot in duct tape. This is a long scene. And for the rest of the movie, he limps and seems in pain.

Car crash seen from afar, a police car flips over.

Will's phone rings and he smiles.