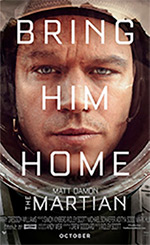 The Martian is a great science movie with exciting scenes. In the ratio of how long the movie is, and how many things to skip, there is very little. There is one big scene, that on the blu-ray version is one chapter, making for easy skipping. The rest is all mild scenes.

"Use the cables from the comms mast as a guide-line, anchor it with the rover!!" Watney yells to his colleagues

You hear screaming as Watney is hit by the antenna and sent flying, but very little is shown. It sounds much worse than it is.

***THIS IS THE WORST SCENE***
On the blu-ray (and possibly the regular DVD), you can skip the entire 3rd chapter.
But, just in case, here is the dialogue leading up to it:
"Commander Lewis and her team were able to intercept with Hermes and are now heading home, but Mark Watney is dead." - Terry Sanders

Watney is shown waking up and has an injury, which he fixes. There is no plot change other than the obvious thing that he is going to live.

He is playing Happy Days in the background and looks at a cross, "By the way, I'm thinking you would be fine with this, given my present situation". He is shown lighting a fire in the lab...and it explodes

It is very mild, just surpising

For scene preceding this one, you see the crew docking with a ship, while music is playing. There is no dialogue. Then you see "7 Months Later" followed by "Sol 461" on the screen.

Mark is shown walking and you can see his skin is in terrible shape.

"I've been thinking about laws on Mars" - Watney

"If something goes wrong, what can mission control do?" - reporter
"Not a damn thing, it is all happening 12 light-minutes away, which means it takes 24 minutes to get an answer to any question they ask" - Vincent Kapoor

Watney is shown again with his skin in terrible shape.

You hear a lady talking in Mandarin over a loud speaker.

"Beck, unhook me, I'm going after him" - Commander Lewis
"Commander, I've got this" - Watney

He uses a knife to cut a hose on his suit and gets sent around the space capsule, but no injury.