Star Wars 9: The Rise of Skywalker 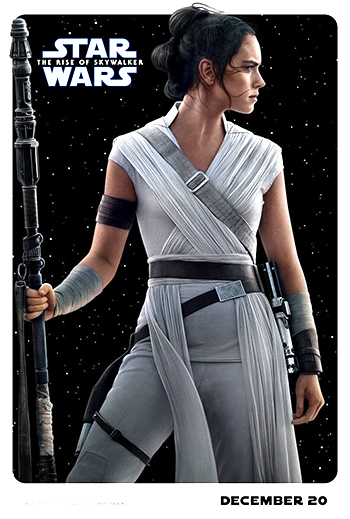 This is the first time in my life that I have watched every moment of a Star Wars movie, in the theater with no prompting or prior knowledge. This is very different from my experience with prior Star Wars movies, and in two of the movies, 2 and 3, my daughter and I decided they were just too violent and gory to watch. (Read more about why we started this website)

So, for Star Wars 9, first and foremost, no flying body parts!! YAY! The violence that is shown is generally very quick and not gory, often off-screen. The small amount of gore have a CGI feel to it, much like the final scene with Luke and Kylo in Star Wars 8.

They continue to use the same way of killing people as was done on Star Wars 7, when Kylo killed Hans Solo. But in this movie, it is fast and generally not emotionally intense, which helps.

The most disturbing part is the face of the main nemesis in the beginning and then for much of the end, which is kind of hard to avoid, especially during the final fight where he has injuries. It is listed as the last scenes below.

Note, there are no movie plot spoilers in the scenes listed.

The usual: Storm Troopers being killed, starships blown up, pilots blown up (some shown up close), a planet blown up, generally not graphic and from a distance.

Star Wars movies blow things up, and kill beings all the time. In this movie, injuries are shown but mostly not up close and in the few cases where they close up, it looks a bit CGI and vague.

So enjoy the movie, I always caveat all of this, if you are really sensitive, Star Wars might not be for you, but if you have managed to get through 7 and 8, and still love it, go see it. It is satisfying to watch, well designed with beautiful effects, and (finally) built with diverse hands giving it the maturity that was needed in this legendary movie series.

He kills a bunch of creatures, very quick

Kylo gets a new hat

He puts down a head of a being, it is not graphic, looks like props/CGI

Not sure when this happens exactly, but Kylo is in a conference room

Officer is flung up to a ceiling, not seemingly hurt

A snake appears, but it is not gross and Rey calms it, no intensity at all.

Rey and the gang are on a planet with a big festival. A Stormtrooper is going to arrest them...

He gets shot in the face with an arrow, not graphic, but surprising and just a gross idea.

The other one unexpected shoots him, not graphic.

Very very quick, "We have found our spy"

I believe this is the where Kylo and Ren are on a spaceship on the water, they are fighting and he is telling Rey about her past, as he tells the story, get ready for this line and don't look.

Shows real people being killed by a light saber, quick and not graphic.

Not sure when to look again, but it is no more than 30 seconds.

The big final fight. Kylo and Rey are individually surrounded and they both make quick work of everyone around them.

They are facing someone who is ugly and at times he morphs and will bother people, see last scene for the most disturbing part of this character.

Rey has injuries, but not bad. Electricity is used to hurt/kill as in previous movies. Star fighters are blown up, including the red-haired pilot, once again. People are shown getting blown up in the big final sequence.

Really not sure how to explain when the fighting is over, but it does get quiet at some point.

Rey is in a electricity filled standoff with her nemesis, she is using two lightsabers.

He sustains injuries that are very disturbing to watch.

Not exactly sure the relief of this scene, but probably pretty obvious from listening.