« Star Wars 7: The Force AwakensStar Wars 9: The Rise of Skywalker » 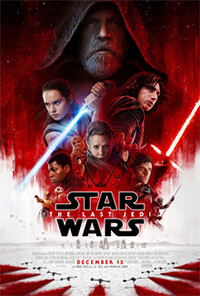 While this movie has lots of scenes, only one is really bad. I added a scene for just about anything I thought might bother, so it is likely you will not have to skip them all. It is not an overly tiring movie as far as input.

For skipping scenes, the last three movies, 7, 8 and 9 are the best for those of us who don't like disturbing scenes. So take a look at Star Wars 7 - The Force Awakens and Star Wars 9 - The Rise of Skywalker.

The last 30 minutes make the movie worth watching (and very little to skip!)

Snoke's face is very distorted and weird. Blasts all the time, only listed when someone is shown getting hurt by it. Some mild wounds on people.

It pushes the boundaries of PG-13, so expect a lot of explosions and light injuries shown on people.

A couple of fighters are blown up

Bomber pilot grabs a controller (she has a bloody nose, so if this bothers you look when while she is kicking for the controller.
"Bombs Away!'

Paige, the bomber pilot is killed, not graphic

"They can't get away, Supreme Leader, we have them tied to the end of a string"
(again, he has a bloody mouth, so skip a bit earlier if you want.

Finn awakens, this will bother people who do not like medical things, although there is nothing wrong, it is just water spitting out of his suit

"You must have a thousand questions"
"Where's Rey" - Finn

Take that ridiculous thing off. - Snoke

Kylo's wound is not too graphic, and Snoke throws him across the room with energy

"Skywalker Lives! The seed of the Jedi Order lives" - Snoke

BB8 and Poe are running "Don't wait for me! Jump in an fire her up!"

"Poe, are you alright?"
"We need to get out range of those Star Destoyers" - Poe

Kylo is attacking a ship and feels Leia...

He doesn't shoot, but someone else does and Leia is sent out into space, while not graphic, definitely violent and weird. Easier to just listen to the first order leadership, because then it moves to Leia out in space. She manages to get to the ship, but passes out. Then Chewie is going to eat a little creature from the island, but doesn't.

Finn and Rose are talking at a pod...
"What were you doing?...checking the escape pods, by boarding one" - Rose

Poe gives Finn the tracker, shows a close up of the sun rising, look away

It shows Kylo's wound being repaired, not graphic, but surprising and disquieting, not for anyone uncomfortable with medical stuff.

Music stops, blaster fires, Rey and Kylo can feel each other. "
You are to bring Skywalker to me" -Kylo

Why do you hate it so much? - Finn
"Look closer" - Rose, he grabs a telescope

Animals are shown being shocked and children mistreated

"And who do you think these people are? There is only one business in the galaxy that will get you this rich..." - Rose

Finn is shocked again, very quick and not disturbing

"All right, you two are under arrest for parking violation 27B/6"

Rocks falling on Luke, he is unharmed, school shown on fire, sounds worse than it is

"Because I was Luke Skywalker"

"The beginning of their end...Destroy it" - Commander of the order

Quick explosion of the medical ship, not graphic, but commander is shown as ship is being destroyed.

Luke is shown waving a light saber toward Kylo, who stops him with his.

"I was left with shame and consequence, and the last thing I saw were the eyes of a frightened boy whose master had failed him" - Luke

The same fight in the tent

"You failed him by thinking his choice was made, it wasn't" - Rey

Snokes is holding Rey's face - "You will give me Skywalker..."

Stormtroopers are marching Rey's friend into a sea of troops...now time to skip many chapters to 1:56:06

Finn and Rose and BB8 escape the hanger, at the same time Kylo saves Rey and kills Snoke. The resistance gets to the planet safely, but Holdo goes down with the ship

Lots of resistance fighters are hit in their ships.

Luke is a hologram, nothing really happens to him

There is nothing to skip, but the spoiler is quite the spoiler, but important for those of us who don't want to see violence.

Send us feedback on the scenes! If you find an inaccuracy with a scene, it would be a tremendous help if you let us know. It is also helpful to know if you watched the movie and the scenes worked!