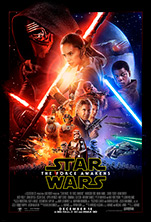 The seventh in the Star Wars saga.

This entry in the Star Wars saga is easy to skip and it is also a good movie. It harkens back to older Star Wars movies. Particularly back to the original movie: Star Wars IV â€“ A New Hope, which was released in 1977.

To begin, it has great comedy and we have discovered if a movie is funny, it is less exhausting to watch. The comedy counterbalances the violence. This movie is playful and does not take itself too seriously, which offsets the darkness that runs throughout these movies.

Also, while this is definitely an action movie with lots of shooting and fighting, the violence does not include many disturbing images. The British Board of Film Classification said it best in their ratings system, when they wrote:

There are frequent scenes of moderate violence, including use of blasters and lightsabers, and dogfights between spaceships. Sight of blood and injury detail is limited and brief.

â€œThe sight of blood and injury detail is limited and briefâ€ is quite true.

For skipping scenes, the last three movies, 7, 8 and 9 are the best for those of us who don't like disturbing scenes. So take a look at Star Wars 8 - The Last Jedi and Star Wars 9 - The Rise of Skywalker.

There are lots of stormtroopers getting killed in non graphic ways, pervasive and throughout the movie.

There is blood shown around and on people a few times (without noticeable injury).

Pilots on fighter spaceships are killed but shown very briefly (the scene cuts away before it actually happens.

This is an action film with dark themes, lots of fighting and people dying.

BB-8 crashes into a tent.
"We've got company" - Poe, who then runs out of the tent

A entire village is killed and a storm trooper who is dying slaps another storm trooper with a bloody hand. This is to identify this trooper. There is not much gore, but a lot of violence and death.

Poe sends a message through BB8 and is captured.
Finn (a storm trooper) leaves the scene and cannot kill.
Kylo Ren is evil, we get it.

Rey and BB8 are walking back to her home in the desert, then it switches immediately to Poe who is bloody and clearly had been tortured.

Kylo Ren can interrogate people with his mind and it causes a lot of pain. He doesn't cause graphic injury, but implied intense pain.

Rey is shown with BB8

Two sets of gangs are talking with Han Solo.
"That BB unit, The First Order is looking for one just like it. And two fugitives."
Definitely time to skip...

On the scale of creatures in Star Wars, they are not as disturbing as others, but they do eat people and it is very very intense.

See storm trooper fighters, then a big guy in a chair.

Finn leaves after Rey asks him to stay. Then she hears yelling down a staircase and follows it, then goes into a room and opens a box...have someone skip for you...

Rey is shown falling back into Maz's...
"What was that? I should not have gone in there" - Rey
"That light saber was Luke's" - Maz

Light is streaming through the sky as everyone watches

"It was the Republic, the First Order, they've done it, Where's Rey?" - Finn to Han
Rey is shown running in the forest.

Maz, Han and Finn are in the basement and she hands the light saber to Finn..."Find your friend....those beasts...they're here" Maz

From here on out, there are lots of stormtroopers that die, but it is not graphic, so I am not writing every time it happens. But there is a lot of fighting in this next sequence, and really not very interesting.

Han and company are arrested, then they look up..
"It's the resistance" - Han
The fighting still goes on, but not as up close.

Rey is in a forest and hears a lot of strange noises...then Kylo appears and she tries to shoot him, but doesn't.

He takes her, but there is no violence.

Han and Kylo meet on a thin long bridge, this is the worst scene, time to just listen. (important plot point), but when it gets quiet for a long time, get ready for an awful sound and Chewie screaming...

Kylo kills Han graphically in the old ridiculous traditions of the Star Wars films. Evaporation would have been much nicer.

Chewie howls again and you hear a lot of shooting....then a big explosion caused by Chewie...
"The oscillators been damaged but still functional"

Finn and Rey see Kylo in the forest...

While you see blood on the ground, this is the tamest of all big lightsaber battles within the Star Wars series, there is some injury, but nothing graphic and no body parts flying (yah!)
There is one scene where Kylo burns Finn, but pretty tame. Rey also burns Kylo and hits him pretty hard in the face...but honestly, it is worth it to watch Rey wail on Kylo...it is how I feel about these movies, and this is the last scene I will write in any Star Wars movies. They just go too far with violence.

It is really up to you, you see fighters fighting interweaved with Kylo and Rey fighting, nothing too graphic...