Star Wars 6: Return of the Jedi 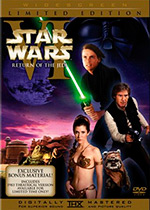 The first 37 minutes are not worth watching, but after that, there are only 6 mild scenes and the overall feel of the movie is much lighter than the others due to the large number of muppets.

It is simply not worth watching the first 37 minutes, it does to move the plot along, Han is freed, that's it. The entire 37 minutes is one big scene.

Han is freed by Leia.

Dead animal is shown on a tree

Luke wails on Darth Vadar behind a staircase...then they move to a bridge,,,

"If you will not be turned...you will be destroyed". - Emperor
This scene is almost worth watching...it is the high point in the movie and on the scale of violence is kind of low. Your call.

Luke is holding a flame to a funeral pyre.