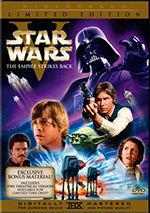 This movie is darker and almost got struck out completely.

General aliens, peril, stormtroopers getting shot, snakes(Dagobah has a lot of snakes, but they never hurt anyone), really, mild things in general. Also, for the last part of the film, Luke is pretty banged up and somewhat bloody. Unfortunately, we really couldn't include any of these things as scenes, because then basically the whole movie would be one big scene.

"There's a meteorite that hit the ground near here." -Luke

Beeping, and Han says "Chewie! All-right , don't lose your temper. I'll come right back and give you a hand."

"Your tauntaun will freeze before you hit the first marker!"
"Then I'll see you in hell!" -Han

This is a gross scene. The snow monster is shown eating part of the tauntaun, and then Luke cuts off the monsters arm.

"You must come along now, R2." -C3PO
After this line, Luke still looks kinda beat up. If you don't want to see, wait until you hear, "Master Luke! It's soon good to see you fully functional again."

Han uses dead tauntaun to save Luke's life. Very gross. Then Luke is shown floating in a tank with a breathing mask. Not gross, but a bit weird.

"Master Luke! It's so good to see you fully functional again." -C3-PO

"General, prepare your troops for a surface attack." -Darth Vader

Ozzel is choked by Darth Vader.

"All troop carriers will assemble at the north entrance." -Leia

"Right now I feel I could take on the whole empire myself." -Dak

Battle on Hoth is intense and lasts 10 minutes. Rebels die somewhat clearly. Battle is more personal, but there is no blood shown. At one point, Dak is implied to be crushed under an imperial walker.

Leia is surprised by weird aliens, and they are shown in an alien's throat. Not graphic, the alien is very muppety.

Bird call.
"Run! A Jedi's force flows from the Force."

"Your weapons. You will not need them."

Luke duels with Darth Vader, after Luke kills him he is shown with his face like Luke's. This is very dark and disturbing, even for this film.

Vader kills an officer by choking him. Shown clearly and graphically.

"Our ships have completed their scan of the area and found nothing."

Han and Leia are tortured. Not shown too graphically, but still upsetting.

"He will not be permanently damaged." -Vader

Han punches Lando, and Han is hit by one of his guards. Very stage acted and mild, especially for this film.

"You are beaten. It is useless to resist." -Vader

"There is no escape. Don't make me destroy you." -Vader

Luke gets a robot hand. Not graphic, just unsettling.