« Star Wars 3: Revenge of the SithStar Wars 5: Empire Strikes Back » 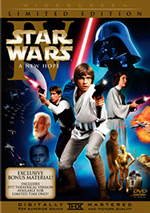 Don't be fooled by this movie's PG rating, A New Hope has plenty of graphically violent and disturbing scenes.

There are many Scenes in this movie, so in order to keep the Scene count down, we don't count storm troopers in helmets being shot at or killed.

Sounds behind a door and then it explodes

Lots of rebel fighters are shot. Their faces are not covered by armor, and you can see them reacting.

On ship, Leia pulls hood off and hides. Darth Vader starts talking, you may want to mute for 1 minute.

Darth Vadar kills one of the officers by choking him, and this is heard and seen fairly graphically.

"I want them alive!" -Darth Vader (or if muting, just wait until one minute is up.)

R2D2 is going up a canyon. Time to look away when Luke is looking through binoculars.

Sand people beat him up, but Luke is fine.

It grows quiet and you can hear R2D2's chirpy sounds, and a thump.
"Hello there." -Obiwan

In Darth Vader's conference room, Darth says "power of the force". This scene lasts for a while.

Luke's family is killed (off-screen) and their corpses are shown. This scene is surprisingly graphic. Darth Vader threatens Leia with torture, and it is heavily implied that she is tortured. Again, this is oddly intense. Dead Jawas are shown, and burned in a funeral pyre.

Luke says "I want to become a Jedi, like my father"

Still in the bar...Hans and Guido are talking, "Over my dead body" (this is a short scene)

"Sorry about the mess"

In the small security office, Guard says "I'll see what I can do".

Luke, "between his howling and blasting..."

In the cell block, guard says "I wasn't notified...I'll have to clear it"

Hans: "Everything is under control...Situation normal"

Luke, Leia and Han are in a garbage chute.

Luke is pulled under the water by an alien, but is released. The Garbage area starts to smash the contents, but they are fine.

Luke, Leia and Hans are running back to the ship, Luke stops and sees the fight between Darth Vadar and Obiwan, he says "Ben?"

The resistance pilots fly up to the space station, there is a lot of pilots lost, but nothing graphic in the whole battle. "I've got a problem here, Eject!"

Pilots' faces are shown as their planes explode. Not graphic, but more personal.

"Rebel Base 30 seconds and closing".