« Star Trek 6: The Undiscovered CountryStar Wars 2: Attack of the Clones » 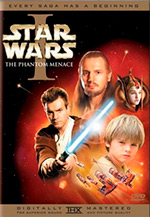 This is the only movie of the prequels that is remotely watchable, and for the Star Wars series it is tame. However, how this movie got a rating of PG is beyond us.

There are alien creatures throughout this movie, and during climatic battle scene both humans and Gungans are killed, nothing graphic, but we hear and see them die.

"The chancellor should never have brought them into this. Kill them immediately." - Emperor

Obi-Wan and Qui-Gon's ship is blown up. The captain is heard and shown just before it happens, and for some reason it seems more personal than normal.

Jar-Jar is lightly sparked with a pointy stick.

Obi-wan and Qui-gon Jinn find themselves underwater, in a submarine, in the planet's core, and Obi-wan says, "You were banished because you were clumsy?"

They are almost eaten by a large fish, but then an even-larger fish larger fish eats that fish. The fish are cartoonish but the violence is still somewhat realistic.

"The invasion is on schedule, my lord." -Viceroy

They are almost eaten by a large fish, but then an even-larger fish larger fish eats that fish.

Qui-gon and crew are on Tatooine, and Qui-gon says, "We have nothing of value. That's the problem.

Small dead animals are shown, cartoonish, and an alien bites the head off of one, shown from afar. Jar Jar is kicked.

"This storm will slow them down." - Obiwan

Just before the pod-race is about to start, all of the engines start firing, and Jar-Jar says "Oh diss'n gonna be messy. Me no watchin'!"

Jabba the Hutt bits the head off of a small, cartoon animal.

The bang of a gong, a beep, and then, "Wait! Little Skywalker has stalled!" - Announcers

At the end of Obi-wan's scream.

After Obi-wan falls partially down the shaft in the floor, he sees Qui-gon's light-saber.

"Agree with you, the council does. Your apprentice, Skywalker will be." - Yoda

"But which was destroyed, the master, or the apprentice?" -Mace Windu