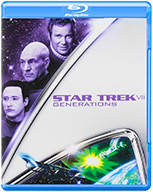 This is an interesting movie, because before we scanned it, we thought, "Oh yeah! that one is good, there isn't much to skip". Alas, it turned out to be one of the hardest in which to capture scenes, partially because there are scenes with no dialog, and partially because they seemed to be playing with the MPAA to get the PG, but pushed the envelope everywhere, so you will see there are lots of scenes, but none of them get the violence ratings. The best part of this movie is Dr. Soran, the antagonist, he is not some creepy alien, but looks like Sting, who can beat that?

There are scenes where a character has blood trickling, but no real injury and was not included to be skipped. Also, there are lots of explosions with people getting thrown around, but no injuries are shown, so that is also not included.

NOTE: On the DVD we watched, upon loading the DVD, a trailer for Star Trek Reboot loaded automatically, and it is violent, best to skip.

Injured passengers from the transport are shown

"Can I help you? It is going to be okay. You'll be all right. You just need to rest, come over here." - Chekov

"These blast patterns are consistent with a type-3 disruptor" - Worf
"Great. That narrows it down to Romulan, Breen and Klingon" - Riker

"Over here! It's all right, do not struggle"- Worf

"Commander! You better take a look at this!" - crew member

"Data, whatever possessed you to push her in the water in the first place?" - Geordi

"Still, I am unable to grasp such a basic concept as humor" - Data

"We found two dead Romulans on the station number one" - Riker

"It appears to be magnetically sealed" - Data

Data opens a port on his arm, but very fake looking

"Yeah. There seems to be some sort of dampening field in here. It is blocking our comm signal. Can you shut it off for us?" - Geordi

"Now, if you'll excuse me captain, I'm rather busy" - Soran

"Do be careful captain. That's a 50-gigawatt force field" - Soran

The Klingon ship explodes, and a Klingon is shown hurtling through the blaze.

After separation, the enterprise crash lands

People are thrown around, but nothing graphic, no blood

Picard faces Soren on a walkway

Fist fight, then Picard has a trickle of blood on his face

It gets quiet, then the rocket launches

"Actually I am familiar with history, Captain, and if I 'me not too much mistaken, you're dead" - Soren

"I thought you were heading for the launcher" - Kirk

Picard gets to the rocket launcher, Kirk is dangling from the walkway...

Soren gets to the launcher, and tries to launch it manually

The clamps are engaged, and Soren gets blown up

Kirk is injured and dies