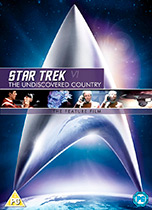 The rating of PG for this movie is simply bizarre. Maybe the MPAA thought the purple blood somehow makes it OK, but in Skipping Scenes world, it is still blood. NOTE: On the DVD we watched, upon loading the DVD, a trailer for Star Trek Reboot loaded automatically, and it is violent, best to skip

Aliens and explosions (not graphic).

The second scene, 30 minutes into the movie is best skipped altogether, so have a friend to do that, and a scene soon after that can be listened to for plot movement.

Someone is shown briefly in an explosion

"This is Brigadier Kerla, speaking for the High Command, There has been an incident on Praxis. " - Klingon voice on TV

"Have you not a shred of decency in you, Kirk? We come in peace and you blatantly defile that peace" -Chang

"I'm going too, they may need a doctor" - McCoy
"Perhaps you're right" - Spock
"Uhura, tell them were coming, and tell them we are unarmed!" - Kirk

Kirk and the doctor go on board and try to save the chancellor, but he dies

The prisoners are on Rura Penthe, and someone sends a beam to open a subterranean door...

This scene has no violence, but the warden is a bit disturbing, and someone is thrown outside to die, it is fine to just listen

"Oh my god...the universal translator has been confiscated" - Kirk

"However, if I know the captain, by this time, he is deep into planning his escape" -Spock

"We're outside the shield, now it is your turn, Captain" - Martia
"If you say so" - Kirk

You hear the two getting transported
"Couldn't you wait just two seconds?" - Kirk

"Captain! Mr Spock! I have found the missing uniforms with Kilingon blood on them." - Scotty

"Arrest those men" - Admiral Cartright
"Arrest yourself! We've got a full confession!" - McCoy

Assassin is killed by Scotty

"Cartwright, just a minute" - Captain Sulu
"What's happened? What the meaning of this?" - Azetbur