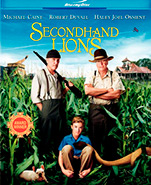 While there are a lot of scenes, it is generally easy to tell when they are coming, and nothing is more intense than play-acting.

There is a lot of sword fighting, but no blood.

Salesman drives up in a red car. This is followed by many salesmen driving up.

Salesman are shot at, but not hurt.

"We found ourselves in the French Foreign Legion...
"'It's all my fault' Hub said, but he told me not to worry...

The scene goes back to their days in the legion and involves a lot of fighting.

Garth and Walter are sitting in the hospital corridor, waiting to hear how Hub is doing.
"...and took Jasmine off to his kingdom and locked her up in his harem." - Garth

There is a lot of sword fighting shown during the story.

"They got married and lived happily ever after...The End" - Garth

Hub, Garth and Walter are in a restaurant. Some punks arrive.
"Hey, who do you think you are, huh? - Punk
"Just a dumb kid, Hub, don't kill him" - Garth (to Hub)

There is a lot of fighting, but no one gets stabbed or seriously hurt.

Hear music and car doors
"They're not back yet daddy"...

More storytelling by Garth...
"Never were two people so happy...and in love...it was perfect" - Garth

"The shiek was terrified, but Hug just released his blade" - Garth

Walter's mom comes back with a man named Stan and they are talking with Walter on the porch.
"Mae, you should go wait on the porch, We're gonna have a little chat, man to man. Why don't we talk in the barn" - Stan

"We can be friends or we can be enemies" - Stan

Stan and Walter get into a fight, and the lion comes and attacks Stan. The lion dies from the stress of the fight. Stan is hurt and not shown, and lives.

You can look once you hear Walter call out "Jasmine?", where they will show Jasmine who is dead and obviously fake...or wait until the whole scene is over:
"You finished packing? Your momma's going to be back from the hospital soon"