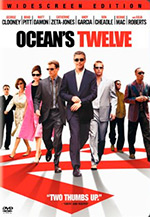 "Ocean's Twelve" is the tamest of the "Ocean's" series, and in our humble opinion, the best.

"You used some nasty words. I've got sensitive ears." -Rusty

Rusty's car is blown up, but he is completely unharmed.

Near the end of the movie, we see members of Ocean's crew boarding a train. The camera zooms in on two men, revealing that they are wearing earpieces. The camera then pans to Linus, who is sitting behind them.

A staged fight "breaks out" to distract the guards while Linus switches bags, and therefore steals the egg. There is no blood, or real violence, but the scene is built up to, and exciting.