« Not Without My DaughterOcean's Thirteen » 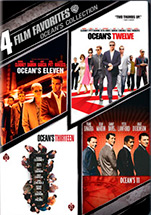 This movie has few scenes, none of which are disturbing, only mildly violent.

We did not include explosions where no one is hurt, (as this is a movie about stealing stuff, several doors are blown, etc.), one scene where a man pretends to have a heart attack as part of a trick as it is very mild, fake, and played for laughs, and that Ocean has a tiny amount of dried blood (presumed fake) on his collar for most of the end of the movie as it is hardly noticable, not gross, and again, fake.

You can look as soon as Reuben says: "You're still in the middle of the !@#$ desert!"

"Our eyes were bigger than our stomachs." -Ocean
"It was our pleasure." -Ocean
"I'd never been to Belize." -Rusty

Frank shakes the dealers hand very hard, which makes him lower the price of the van. He doesn't seem very hurt though. Mild scene.

Many of the crew are in a van that is leaving quickly...
"Where's Linus? Where's Linus?" -Danny
"Shouldn't somebody help him?" - Mormon brother
A window is broken.

The amazing yen gets his hand banged by the van door. Not graphic.

Danny is punched, very play-acted with no blood.

General mayhem as the power is restored. Nothing bad, just people shoving each other or getting knocked over.

Quiet, then the music is restored, and thumping. It is a while before anyone speaks, but it is fine to watch.
"Not yet. I'm sure it's fine." -Ocean

Benedict figures something out. Scenes from earlier are shown again. Then Benedict walks alone to a door guarded by two guards.