« Little Man TateNot Without My Daughter » 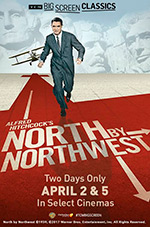 Someone throws a knife and kills Mr. Townsend. You don't see it, just him reacting and falling over. Mr. Thornhill then takes the knife out and a picture is taken, there doesn't appear to be any blood on the knife.

"Get Back!" Mr. Thornhill, then music intensifies with no dialogue.

Mr. Thornhill is running from a plane and jumps in front of a big truck. The truck tries to stop...

The truck tries to stop, and doesn't in quite enough time, so tMr. Thornhill goes under the front of the truck but is unharmed.

The plane flies into the truck and explodes. The pilot is killed, but no one else is harmed.

The driver urges Mr. Thornhill to move away.

In an auction, Mr. Thornhill starts making crazy bids. Someone confronts him.
"You take your hands away or I'll sue you!", Mr. Thornhill.

They get into a short fistfight.

"What took you so long!" - Mr. Thornhill

She fake shoots him, but it looks real. They take him off in an ambulance.

"You know what I think, I think your jealous" - Mr. Vandamm

"I found it in her luggage" - Thug

Mr. Thornhill climbs up to a balcony and goes into a dark room.

He looks at his hand which has some blood on it. He writes a note to her on matches that they are on to her.

After the glasses are done clinking in the background.

Eve and Mr. Thornhill are sneaking around a bend, and someone is hiding around the side of the rock.

He tackles Mr. Thornhill, who manages to throw him off the cliff.

"Help me! Help me!" Mr. Thornhill implores a man standing by.

The man steps on his hands, but then is shot from a distance and falls over the cliff.