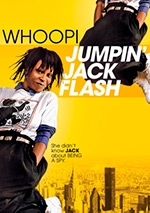 This movie is pretty exciting, but easy to watch because Whoopi's funny reaction to situations diffuses the intensity. In general, with the exception of the last scene, most of the scenes are mild.

Opening Credits - Scanning down the fireplace

Terry leaves Jack's apartment and gets in a cab.

Cab driver has been replaced by a bad guy, Terry hits him with the frying pan, then jumps out of the car. The driver is knocked out and the cab crashes.

After the sounds of the car crash.

Terry goes to the docks and meets Mr. Van Meter. He surprises her, but it is OK. It is not until he says "I'm sorry you got this involved..."

Mr. Van Meter and Terry are chased and he pushes her into the water to save her. He is killed.

You hear Terry call for Mr. Van Meter and then gasps, you can look when there are sirens.

Terry gets trapped in a phone booth. When it finally crashes, she escapes, but bad guy is in cab and grabs her "Your @ss is mine,@sshole." (Don't look during that line)

Terry is injected with truth serum

Terry is walking in New York at night, and runs into a gang. The gang does not hurt her, but the bad guys appear. Time to look away when Terry says "I'm cured! I'm cured!"

They knock her out and take her to a basement. They threaten her. She hits them and gets a gun and then threatens to kill herself, which gets her out of the consulate.

Better to just listen to the scene, they do not harm her. It is all over when you hear police and Terry says "Took you guys long enough to get here!"

Terry makes it back to the bank and the bad guys appear. When Jeremy Talbot falls from a chair, it is time to look away for awhile.

The two blonde bad guys get killed. The new coworker (Marty) is actually one of Jack's friends and arrests Jeremy Talbot.

When you hear Jeremy Talbot say "I don't believe this".