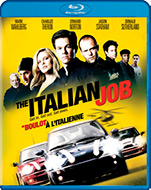 "Italian Job" is a very exciting action movie, with lots of fast getaways, and even faster cars. But what sets it apart from other movies of its kind is the fact that it is surprisingly light on violence.

After the first heist, Charlie and the gang drive onto a bridge, and Pink Floyd song is heard playing.
"Who are these guys?"
(On blu-Ray can be skipped to next chapter)

John gets shot, Steve turns out to be bad, and attempts to kill everyone, thinks he succeeds, but actually fails. Also, the machine gun heard during this scene doesn't actually hurt anyone.

The music changes, and then a drill is heard.

Stella drives through Steve's gate in a cable truck.

Steve goes to Yevhen's shop.
"Venice, that's where these bricks..."
"You were saying something?"

Yevhen gets shot, and his cousin sees him dead.

After the Ukranians interrogate a man about gold bricks, but don't hurt him, a golf ball is hit.

Ukrainians threaten Skinny Pete with an ax, but do not hurt him.

"Steve just called to confirm his eight o'clock reservation at the Water Grille."