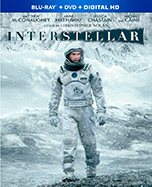 This movie is very exciting and yet, the scenes that are skipped are relatively tame. None of the scenes got the highest rating, and none include disturbing images, which is rare for such an exciting movie.

"CASE, go get her." -Doyle
In water, CASE picks up Amelia.

Doyle doesn't quite make it onto the ship, before the wave hits. Amelia and Cooper are tossed around a bit inside the ship, but are completely unhurt.

Cooper swears, then says "hang on".

"We're gonna spark it!" -Cooper
The engines turn on.

Doyle is shown from afar, face-down, floating in the water.

Long pause, you can look when people start talking quietly.

Outside, Mann and Cooper are talking, "The truth is, I never really considered the possibility that my planet wasn't the one." -Mann

Mann pushes Cooper down a cliff, and they wrestle around. Tom punches the doctor, more implied then seen.

"Coop get her stuff, she's going home."-Tom
"Dad didn't raise you to be this dumb, Tom."

More wrestling, Cooper's helmet is cracked, and he cannot breathe well. Amelia rescues Cooper, then Romilly is killed by an explosion. Sounds worse than it is, mute if you want.

"This is not about my life, or Cooper's life. This is about all mankind." -Mann

Mann is sucked out into space, and then there is an explosion.

"There is no point using your fuel to chase." -CASE
"Analyze the Endurance's spin." -Cooper