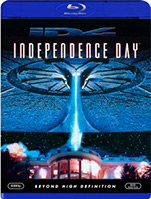 This movie definitely pushes the limits of Skipping Scenes...but it is a very exciting movie and a lot of fun to watch, but there is one sequence that is just downright awful. If you are very sensitive, you may want to skip this movie. But if you have a pal that can ensure that you see no part of that one awful scene, then go for it!

The presence of aliens and general destruction.

The 10th scene is off-the-charts bad, it is OK for listening, but don't watch it...we would probably rank it as the worst scene of all Skipping Scene's movies.

"We still have zero visibility...Instrumentation is malfunctioning ...We can't get any kind of reading of what's in front of us...Wait a a minute ..." - pilot on a radio with the President listening

"Line is gone sir...two more have been spotted over the Atlantic" - military personnel in Oval office

David goes up to the roof of the cable company...police car stops

Welcome wagon helicopter is hovering near spaceship "It looks like there is some kind of activity. Here...This may be some type of response, EchoOne." -pilot

Spaceship shoots down the helicopters

Clock on David's computer counts down to zero "Time's up." This starts a long sequence of cities being blown up but nothing graphic is shown, except one quick shot of someone being thrown sideways into a windshield but no blood

Spaceships blow up all major cities

You hear Jasmine yelling Boomer! And most importantly the dog is fine. It is completely safe when it goes quiet.

"Knights pull up! Pull up! ...Knight 3 Pull up!" - Hiller
"Controls are showing failure of stats" - Knight3 pilot
This starts a sequence of many pilots being shot down, the pilot is shown blowing up, but not particularly graphic

Jimmy's plane is blown up and base is attacked

"What are you shooting at? Where you at baby? Come on! Come on!" - Hiller

"Ship all banged up! Who's the man?" - Hiller walks up to the alien spaceship

The alien suddenly appears and Hiller punches it

On Air Force one...
"Excuse me, Mr President...That's not entirely true" - Nimziki
What? Which part? David

"You know this was supposed to be my weekend off" - Hiller

Down in Area 51
"This is the vault...or some of us have come to call it The Freak Show" - Dr Okun

!!!!This whole next scene is off-the-charts bad!!!!
...listening is fine for plot line
Jasmine and First Lady are talking
"I didn't want to say nothing...I voted for the other guy". -Jasmine

Alien parts....seriously. Then alien kills Dr Oken and speaks through him..alien sends thoughts through president, which hurts him...finally they kill the alien

"We're stuck. It's not responding, we're stuck" - Hiller,
The scene then moves back to Area 51 where aliens shoot at people on the ground. The scene is not too bad except at the very end when the Press Secretary gets to door.

People are blown up