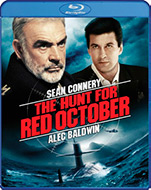 This movie is very exciting but the actual time looking away is relatively short.

Most of the scenes listed are mild, but there are two that are bad (but brief).

Captain Ramius and the Political Officer Putin, open the orders for their mission
"Captain, this is an historic moment for all of us. I'd like to make a request." -Officer Putin
"Before you proceed, comrade..." - Captain Ramius
"I know it is not protocol, but would you permit me to post our orders and inform the crew of our mission..." - Officer Putin

"This thing could park a couple of hundred warheads off Washington and New York, and no one would know anything until it was all over." - Submarine builder, Skip Tyler

"I'm afraid that is impossible, Doctor. Our orders are for strict radio silence." - Captain Vasili Borodin

When Padorin receives a letter from Ramius, he is mesmerized and then drops his glass which breaks...this is followed by a long phone ring, just very startling

"Pick up your left wing.
You're drifting left. Power, power!
Wave off! Wave off!
Eject! Eject! Eject!" - voice on radio

Plane crashes at a distance

"This business will get out of control and we'll be lucky to live through it." - Admiral Painter

Jack is getting lowered down to the sub
"It would be easier without the bloody crosswind!" - Pilot

Sub guy is hit and thrown off the side, safety cables catch him

Americans are now on Red October
"So that's it?" -Jack
"Not quite. Right now CaptainTupolev is removing the safety features on all his weapons. He won't make the same mistake twice." -Ramius

"Ryan be careful what you shoot at. Most thing in here don't react too well to bullets" - Ramius (you can look now)
"Right." -Jack

Jack drops down from the overhead walkway, the cook is holding wires and looks up at Ryan
"A god damn cook!" - Jack

Cook is killed and Tupelovs boat explodes, afterwards the captains bloody shoulder is shown until the OK. If you are not worried about the bloody shoulder, you can look after the shots have been fired.

"We have ascertained the Red October's final position..." -American politician