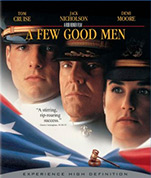 This movie has no graphic violence, just a few scenes with a disturbing theme, but not much is shown. Those scenes are listed.

Driving in a jeep to Santiago's quarters
"Private Santiago was not to be harmed in any way". Kendrick
They walk down a corridor

"We should make sure somebody gets this to his parents" - Lt. Kaffee

"Private I want you to tell us one last time" - Lt. Kaffee