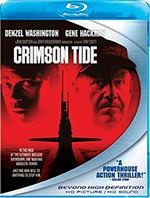 Crimson Tide is an exciting movie starring Denzel Washington, that we believe is worth skipping ten scenes for.

At one point we see an enemy submarine explode underwater from afar, but it is not graphic at all, and actually a pretty cool special effect.

Characters are in general underwater peril throughout the movie.

"This is Richard Valeriani, reporting live for CNN, from the French carrier Foch, somewhere in the Mediterranean."

News footage is shown of rioting, injured rioters, and explosions.

"This is Richard Valeriani, reporting live for CNN, from the French carrier Foch, somewhere in the Mediterranean."

"Maybe its not as bad as it looks."

There is a fire in the galley, and men, including the XO, battle the blaze.

"Attention, all hands, the fire has been contained."

A doctor attempts to resuscitate a patient, but fails.

We hear keys clanking.
"So, Mr. Hunter, do you think I was wrong to run that drill?"

Two crewmen rough each other up.

A crewman is shown with a head injury and blood all over his face.

We hear the submarine. "Alright gentlemen, let's get on with it."

"Blige bay, Conn, I say again, seal that bay... Lieutenant Hellerman, you have your orders!"

"What are you doing down here?"
Jesus, I was just going to the bathroom."

Rivetti beats up the guard, he is shown with a bloody nose.

"Give me the goddamn key!"

"In the early hours of this morning, Russian army forces moved in..."

"This is Richard Valerani for CNN..."