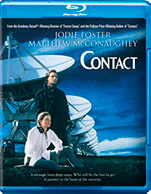 Overall, this movie has very few scenes, only one of which could be described as graphic in any way.

During the systems test, Ellie talks to Drumlin when she sees someone who shouldn't be on the platform.
"David, he's got something in his hand." - Ellie

A bomb is detonated in the machine, killing Drumlin.

"I need you to be professional, people, settle down!" - Ops Director

During a congressional hearing..."You're implying, this is all some kind of hoax? That he engineered this?" - Ellie

Haden is shown dead, not graphic

"Doctor, are you familiar with the scientific precept, known as Occam's Razor" - Mr. Kitz