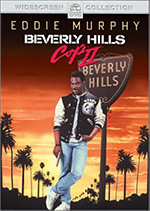 This movie is very similar to Beverly Hills Cop I as far as violence, so if you were able to get through it, then this one can be done too. It is light on plot, so it is easier to simply skip the violent parts, which, just like the first movie don't take up much time, but are very violent.

There is some crazy violence in this film, that reaches the maximum of skipping scenes, so please be careful!

Opening Scene...robbery which involves a lot of shooting, but no one appears to get hit. At the very end, when they are leaving the back door, one guy is hit and knocked out

Guy by the back door is hit and knocked out.

Bogamil stops to help woman with a broken down Mercedez, she pulls out a letter
"What do make of this Andrew?" - Karla Fry

Bogamil is shot at point blank

The bad guys are robbing a horse track, near the end you see Karla grab the gun of security guard...look away right away

Axel, Rosewood and Taggert arrive at the track
"We're a little late" - Rosewood

"All I can tell you right now, is that we are confident that we have identified the alphabet bandit" Police Chief Harold Lutz

Axel pulls a gun on a truck driver
"Sing yo baby yo baby yo!" - Axel

They knock the guy out

Billy attempts to thwart a window alarm with gum wrapper
"Billy, you sure you know what you are doing? - Taggert
"Trust me" - Rosewood

Thus begins a long shootout, that is not worth watching, just violent. Don't be fooled by the sound of sirens and quiet moments, the most violent part is after that. This scene is about two minutes long

Axel kills the Maxwell Dent, and Taggert kills the Karla just as she is about to kill Axel.