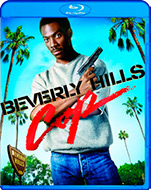 This movie has some very graphic violence, but it doesn't spend a lot of time on it. There are big stretches of this movie with a lot of comedy, which lightens the overall movie. For the high excitement level, it is not exhausting to watch, mainly because it is mostly a comedy. But the violence that is there, is rated high.

The scenes do not include people throwing people and cars crashing.

Please note that the last scene is CRAZY violent, it deserves even higher than our highest rating. The first scene is also very disturbing, so please be careful with this movie.

After Axel and Mickey Tandino play pool at the bar, they are in hallway near Axel's apartment and Axel says "Balance yourself. OK. Here we go." (Axel laughs)

Mickey is killed by two goons.

Listen for sirens. Just a note that there are a few awkward pauses, don't let them fool you into thinking the scene is over, wait for the sirens.

"You watch your mouth" - Taggert
"Hey man, don't square off with me with some bull, you want to start some static?" - Axel

Axel is acting drunk toward a suspect, the suspect stops the music...
"Phil! What's wrong Phil? What's with all the hostility?" - Axel

Axels punches the guy with gun and pulls the gun away, very brief

Axel, Jenny and Detective Rosewood arrive at the warehouse (note this is the second time Axel has been to the warehouse with Jenny).
"Well cos" - head goon
"Are you still pissed at me?" - Axel
"No, No....But I should have taken care of you in Detroit" - head goon

The goon starts beating up Axel. There is a long pause, then you hear Detective Rosewood yell "Freeze!" and it becomes very violent as Rosewood kills one of the goons and Axel punches out the rest.

Axel, Detectives Rosewood and Taggart arrive at Victor Maitland's house. Jenny has been kidnapped. There is a long sequence of them entering the property. But when Taggart comes over a railing (and Axel laughs), time to stop looking.

Axel says "You guys go around the front, I'm gonna check the back"

Detectives Rosewood and Taggart are lying down and Rosewood is reloading his gun and starts chatting. Taggart says "Billy, I'm gonna make you pay for this"

Axel kills the leader of Victor's goons, shortly after, Victor shoots at Axel who is shot in the shoulder.

Victor is holding a gun to Jenny's head and says "Be careful old boy, you might hit me"
!!!Caution, this is a very violent scene!!!

Axel and Detective Bogomil shoot Victor many times, killing him.

Detective Rosewood says "Police! You are all under arrest!"