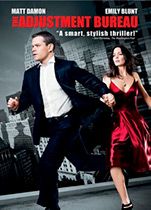 For as exciting as this movie is, it is relatively tame. There are a couple of surprising scenes, but on the whole, no one ever gets seriously hurt.

Harry is hit by a car suddenly, but seems fine.

"We are the people that make sure things happen according to plan. " -Richardson

David is trying to find Cedar Lake Ballet Company...
"Wow, the ripples must just be endless. I don't care what you put in my way, I'm not giving up!" -David

A violent car crash is shown suddenly, a man is shown with a lot of blood on his face.

"Unfortunately, you're the only witness." -Police Officer

David is watching Elise dance...
"When you look back on all of this David, just remember, we tried to reason with you." -Donaldson

Elise falls and sprains her ankle. Then David punches Donaldson. Neither is graphic.

"This is what you do, David." -Donaldson

David and Elise are talking in a bathroom...
"You don't know anything about me and what makes me happy." -Elise

"Don't worry about him, he's with them." -David

David and Elise are jogging through a large library...
"Oh my god." - Harry Mitchell.
"Hey! You can't be in here." - someone in the crowd